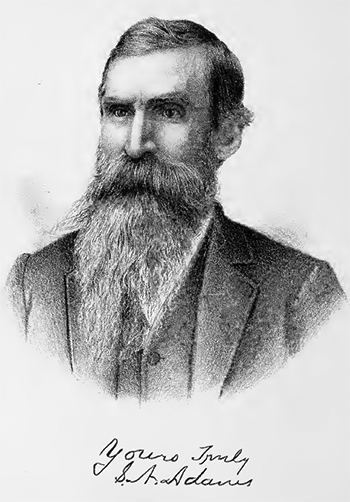 Of all the gallant soldiers who bravely marched to meet a foe no less determined than themselves, of the patriotic citizens devoting the strength of manhood to their native land, none were more gallant than he whose portrait appears on the opposite page and whose biography is herein narrated.  As County Recorder of Greene County he has secured the confidence of the people, and is constantly receiving evidences of the public approbation.  He is always at the post of duty, and with his comprehensive insight into business matters and promptness in executing the details of office work, he is recognized as a prominent factor in the upbuilding of the city. Being first elected to fill a vacancy in the office of the County Recorder in September, 1881, so ably did he discharge its varied duties that he was duly elected thereto in the fall of 1882.  He was re-elected in 1885 and again in 1888, qualifying each time the following January.  His present term will expire on New Year’s Day, 1892.  That he is fulfilling the office to the satisfaction of his constituents, his continuance year after year amply proves.   He does not confine his interest in public duties to the routine of official cares, but in every measure having reference to the development of Xenia and Greene County, he is enthusiastic.

Before more fully outlining the history of Recorder Adams, a few words in regard to his ancestors will not be amiss.  His father, Samuel Adams, was born in Leesburg, Loudoun County, Va., and when a young man went to Maryland.  There he married Miss Nancy Burnston, of Baltimore and made his home for a time in that State.  He was a finisher in a woolen factory and removed in order to follow the same business.  In 1842 he went to Fredericktown, Knox County, thence to Delaware County, and in 1847 became a resident of Ohio, locating in Spring Valley, this county, where he spent nearly all the remaining years of his life.  He breathed his last October 14, 1871, his widow surviving until 1882.  They reared a family of eight children, of whom N. G., A. J., Eliza, Mrs. E. Bunting, and our subject are in this county.  The others are:  Amelia, wife of William Kirkpatrick; Virginia B., widow of J. D. Hepford, of Council Bluffs, Iowa; Mrs. Catherine Kauffman, of Canton, this State, and W. H., whose home is in Arkansas.

Samuel N. ADAMS, the subject of this biographical notice, was born in Bedford County, Pa., December 15, 1835, and in his boyhood and youth received such educational privileges as were afforded by the section in which he lived.  At the age of twenty-two years, he left the parental roof to begin life for himself, working at the trade of a carpenter, and continuing so employed until after the breaking out of the Civil War, when he enrolled among the defenders of the Union.  He became a member of Company D, One hundred and Tenth Ohio Infantry, under command of Col. J. W. Keifer, his term of service beginning August 16, 1862.

As an integral part of the Army of the Potomac, Mr. Adamsparticipated in numerous engagements, the list including Union Mills (Va.), Winchester Heights, Stevenson’s Depot, Wapping Heights, Brandy Station, Mine Run, the Wilderness, Spottsylvania, York River, Cold Harbor, Petersburg, Ream’s Station (Va.), Monocacy (Md.), Snicker’s Gap, Charleston and Smithfield (Va.), Opequan, Fisher’s Hill, Cedar Creek, Cedar Springs, Petersburg (Va.), March 25, 1865, and the assault on the same city April 2.  At this contest he was wounded so severely that his right foot had to be amputated in Washington ten days later, the left foot also being badly injured.  He spent five months in the hospital and was then mustered out in September, 1865, returning to his home in Spring Valley, this county.  Mr. Adamsreceived the appointment of United States store-keeper at Beaver Station, now Trebein’s and served the Government in that capacity there a year, at the expiration of that period being transferred to Mt. Holly in the same capacity.  He remained in the employ of the Government until 1871, and then went into the grocery business at Spring Valley, continuing the business until about 1880.  In the meantime he held the commission of Postmaster under Gen. Grant for the term ending in 1876, and also acted as Government store-keeper at Osborn two years.  His next move was to the position which he now occupies and in which he has worked faithfully and conscientiously.

In Spring Valley, March 11, 1867, Mr. Adams led to the hymeneal altar Miss Amanda Riddell, of that place.  She is the daughter of Silas Riddell, an old settler of the town in which she was born July 6, 1842.  Mr. Riddell is now deceased but his widow survives, making her home with her daughter, Mrs. Adams.  Of the three children born to Mr. and Mrs. Adams, two are yet living, namely, Rella E. and Gertrude.  They will receive all the advantages in the way of schooling that the means and desire of their parents can compass, and such careful home instruction as will ensure their usefulness in the years to come.

While residing in Spring Valley, Mr. Adamsserved the township in the capacity of Treasurer.  Certainly the people have manifested their appreciation of his ability and character, and it is with pleasure we record the fact.  He belongs to the lodge and encampment of the Independent Order of Odd Fellows and to the Grand Army of the Republic.  His wife is a woman of fine character and cultured mind and is esteemed by the entire community.

The late Samuel Norton Adams, veteran of the Civil War and for many years recorder of Greene county, who died at his home in Xenia in November, 1907, and whose widow is still living in that city, was a native of the old Keystone state, but had been a resident of Ohio and of Greene county since the davs of his boyhood, his parents having settled here in 1847. He was born in Bedford county, Pennsylvania. December 15, 1836, son of Samuel and Nancy Ann (Burnston) Adams, the former a native of Virginia and the latter of Maryland, who became residents of Greene county in 1847 and here spent the remainder of their lives.

Samuel .Adams was born at Leesburg, in Loudoun county, Virginia, and as a young man went to Maryland, where he married Nancy Ann Burnston, of Baltimore. He was a finisher in a woolen factory and in following his vocation resided at various places in Maryland and in Pennsylvania until 1847, when he came to Ohio with his family and located at Spring Valley, becoming a farmer in Greene county, where he spent the rest of his life, his death occurring on October 14, 1871. His widow died in 1882. They were the parents of eight children, of whom the subject of this memorial sketch was the fourth in order of birth, and of whom out one, James E. Adams, the seventh in order of birth, is now living, he now making his home in Oregon, the others having been Mrs. Amelia Kirkpatrick, Mrs. Kate Kauffman, Mrs. Eliza Bunting, Mrs. Virginia Hepford, William and Nelson G.

Samuel N. Adams was but ten years of age when his parents came to this county and located at Spring Valley and there he grew to manhood, early learning the carpenter trade, at which he worked in various towns hereabout, and was thus engaged when the Civil War broke out. He enlisted for service and went to the front as a member of Company D, One Hundred and Tenth Regiment. Ohio Volunteer Infantry, Colonel Keifer's regiment, and with that command served for three years and five months, being mustered, out in September, 1865. The last five months of that period were spent by Mr. Adams in a hospital recovering from a wound received at the assault on Petersburg, Virginia, April 2, 1865, from the effects of which he suffered the loss of his right leg and the crippling injury of his left leg. Upon the completion of his military service Mr. Adams returned to Spring Valley hopelessly crippled and not long afterward was appointed to the position of United States storekeeper at Beaver Station, now Trebeins, and served there in that capacity for one year, at the end of which time he was transferred to a like post at Mt. Holly, remaining thus in the government employ until 1871, in which year he became engaged in the grocery business at Spring Valley. He received the appointment of postmaster while thus engaged, serving during the second Grant administration, and at the same time for two years held the post of government storekeeper at Osborn. In September, 1881, Mr. Adams was elected to fill an unexpired term in the office of county recorder and moved to Xenia. He was retained in this office, by successive re-elections, for more than ten years. Upon the conclusion of this long period of public service Mr. Adams continued to make his home in Xenia and there spent the rest of his life. He was a member of the local post of the Grand Army of the Republic.

On March 11, 1867, at Spring Valley, Samuel N. Adams was united in marriage to Amanda A. Riddell, who was born at that place on July 6, 1842, daughter of Silas and Jane (Wilson) Riddell, Pennsylvanians, who had located at Columbus, this state, after their marriage and after a sometime residence in that city had come over into Greene county and settled at Spring Valley, where they spent the remainder of their lives, Silas Riddell being there engaged at his trade of shoemaker. Though birthright Quakers, Silas Riddell and his wife became members of the Methodist Episcopal church at Spring Valley. They were the parents of five children, of whom Mrs. Adams was the fourth in order of birth, the others being Levi, now deceased, who married Mary Bechtol and was for many years surveyor of Greene county; Robert, a shoemaker, who married Lydia Spear and died on January 8, 1918, at Alma, Arkansas; Humphrey, who died in the days of his youth, and Letitia, deceased, who was the wife of Daniel Gust, of Spring Valley. To Mr. and Mrs. Adams were born two daughters, Rilla, who died at the age of forty-eight years, and Gertrude, wife of Thornton A. Zill, of Xenia, and the mother of two children, Dorothy and Charles Daniel. Since the death of her hushand Mrs. Adams has continued to make her home at Xenia.