The Stokers, now one of the strong and prosperous family connections of Hancock county, have been identified with the county's affairs for more than half a century. The paternal ancestors were of German origin, and the first of the name who appeared in America was John Stoker, who eventually found his way to the west. His son, Jacob Stoker, was born in Perry county, Ohio, June 29, 1806, but in early life located in Fairfield county, where he remained a number of years. In 1845 he came to Hancock county and purchased one hundred and sixty acres of land, to which he subsequently added eighty acres, and all of this he cleared and improved by his own labor. He was a fine specimen of the sturdy pioneer, of evenly balanced character, industrious habits and not to be discouraged by any kind of hardships. Eventually he succeeded in converting his originally wild land into a good estate, which increased in value as the years went by and made a comfortable inheritance for his descendants. By a marriage in 1828, with Elizabeth Hartsock, he had a daughter named Athelinda. The first wife dying, he was married March 4, 1830, to Mary R. Pence, who was born in Fairfield county, Ohio, January 4, 1812. The children by this second union were: David P., born January 4, 1831; Tunus A., September 4, 1832; Dicy R., February 21, 1834; Darius R., December 27, 1836; Cyrus H., born July 19, 1939; Mary J., November 22, 1841; and Wilson C. Jacob Stoker died February 28, 1866, and his wife on July 14, 1889. Three of their sons entered the Union service during the Civil war and made highly honorable military records, two of them sealing their devotion with their lives. Darius and David enlisted September 19, 1861, in Company F, Twenty-first Regiment, Ohio Volunteer Infantry, and their brother Cyrus joined the same command a year later. They took part with their regiment in the bloody battle of Stone River, near Murfreesboro, Tennessee, in the early days of 1863, and fared badly as a result of the desperate fighting. Cyrus was killed on the battlefield and David was so badly wounded that he lingered but a short time after the battle. Darius also received a wound, but recovered, and at the end of two years' service was honorably discharged. 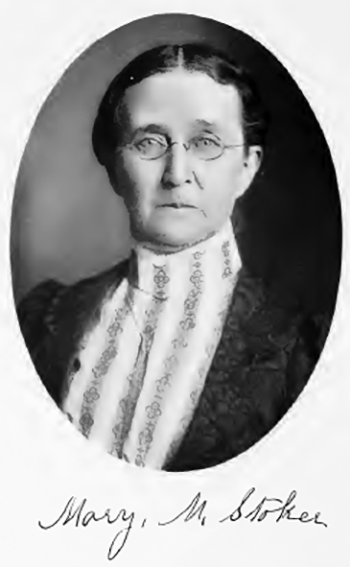 After returning from the army Darius R. Stoker engaged in farm work, and pursued it with such success as to eventually gain standing as one of the leading farmers of this country. At the present time he owns one hundred and forty-three acres of good land in Liberty township, which is well improved as to buildings, fences and other adjuncts of an up-to-date farm, and this estate is managed and cultivated by Mr. Stoker according to the best modern methods of scientific agriculture. October 13, 1863, Mr. Stoker was married to Miss Mary N. Strother, who comes of a noted old Virginia family that is deserving of more than a passing notice. John and Anna Strother, who came from Virginia to Licking county, Ohio, in 1818, had a family of seven children. One son, Isaac J. Strother, who came to Ohio at the same time, engaged in farming and achieved success in that line. By his first marriage, with Hannah Beardsley, he had one daughter named Eliza Ann. In March, 1838, his second marriage took place, with Elizabeth Hall, by whom he had six children: Mary M. (now Mrs. D. R. Stoker), Amos B., Caroline V., Absalom H., Lucy D. and Emily T. Mrs. Stoker's mother died in August 1866, and her father in 1868.

The union of Darius R. and Mary M. (Strother) Stoker resulted in the birth of four children. Clemma A., the eldest of these, was married in 1892 to Frank P. DeBrandt, and has three children. Viola M., second child of Mr. and Mrs. Stoker, became the wife of Aeneas Collingwood in 1892. Luella D., the third of the family in order of birth, was married in 1894 to Nelson C. Altman, and has four children. Arthur H., youngest child and only son of Mr. and Mrs. Stoker, was married in 1900 to Frankie D. Ullom. The family attend religious services at the United Brethren church, of which Mr. Stoker is a trustee, and for ten years was superintendent of the Sunday-school, in which he took much interest. It should be added as a matter of pathetic interest and showing the regard in which this family is held that Stoker Post, Grand Army of the Republic, at Findlay, is named in honor of the brother killed at the battle of Stone River.